I’ve been making a high-power coaxial low-pass filter for 23cm using a 9th-order Chebyshev design based on the most excellent filter design spreadsheet from Dom F1FRV at http://f1frv.free.fr

I think Dom’s site is no longer active, so I’ve made a copy of the spreadsheet I used here 23cm LPF LP9-23cmv2 and the Internet Archive has the main page archived here 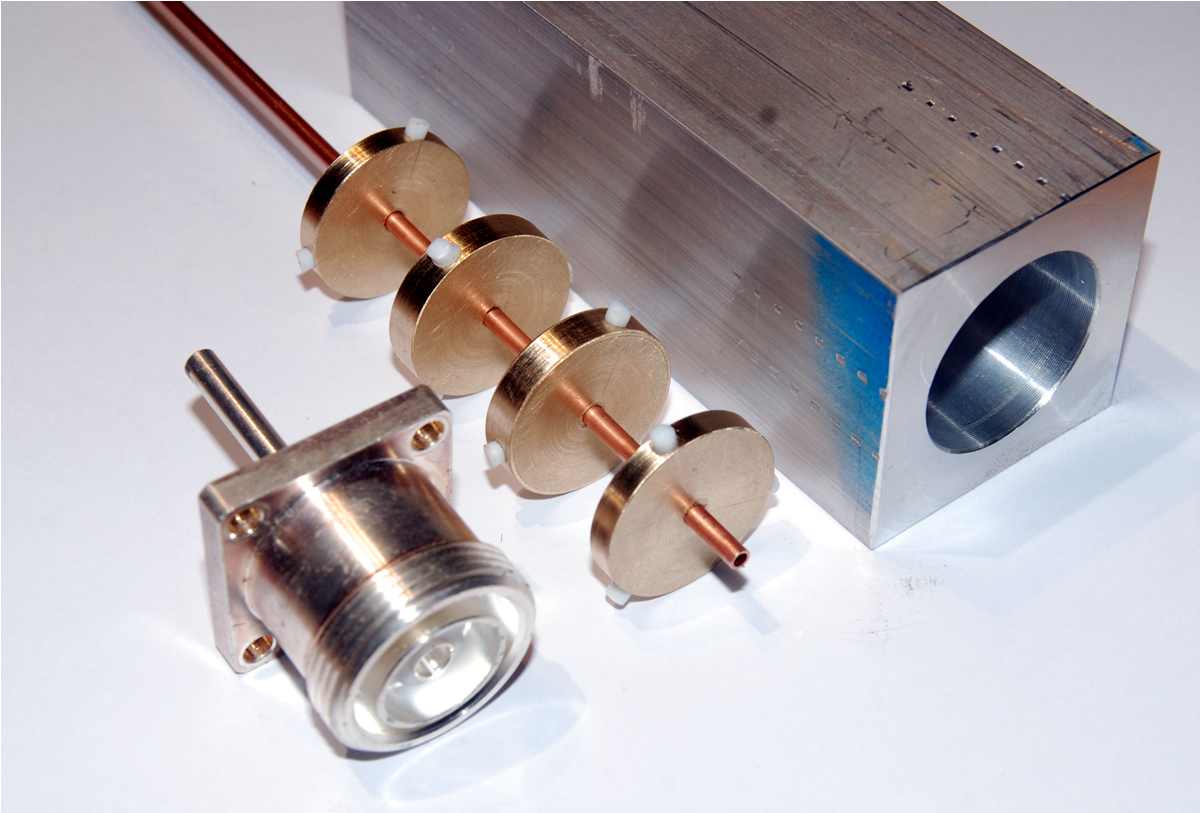 This specific design uses the parameters in the screenshot below.  I used 3mm diameter copper steam pipe with 0.45mm wall for the central rod.  I bored the aluminium block to 30.00 +- 0.02mm internal diameter.  The discs were turned from brass to 26.00 +-0.01mm OD and drilled and reamed with a central 3mm hole to be a tight sliding fit.

Three holes 3mm diameter and 5mm deep were drilled at 120-degree intervals around the edge of the discs.  I turned some PTFE rod to slightly over 3mm OD and pushed it into the holes, then trimmed with a scalpel to 2mm thick using a piece of scrap aluminium machined to 1.95mm thickness and drilled 3.2mm.

The discs were soldered to the central tube, with the spacing very carefully controlled. Dom suggests it is a better solution to use 2mm threaded rod and locknuts as it makes adjustment possible.  Also the thinner centre rod allows slightly improved performance because of the higher ratio of impedances that is possible. 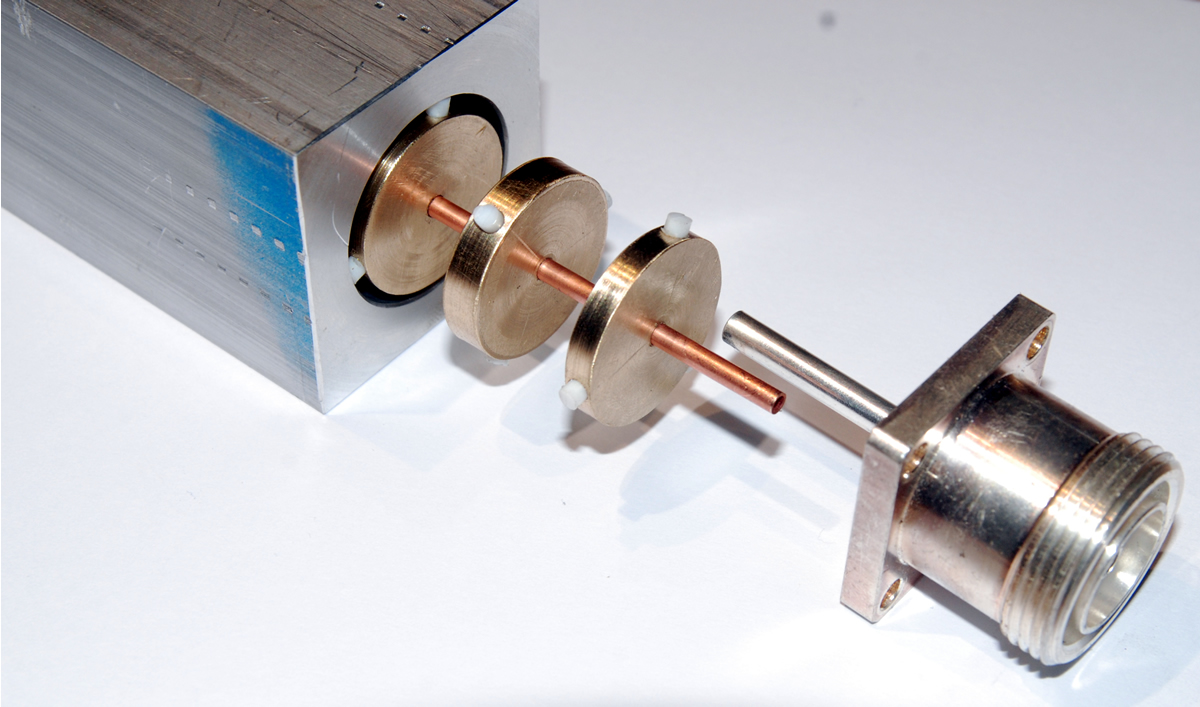 A quick test assembly to ensure the discs and insulators fit correctly, then I shortened the centre pin and turned to to fit the ID of the copper tube, with a spigot 5mm long by 2.1mm diameter 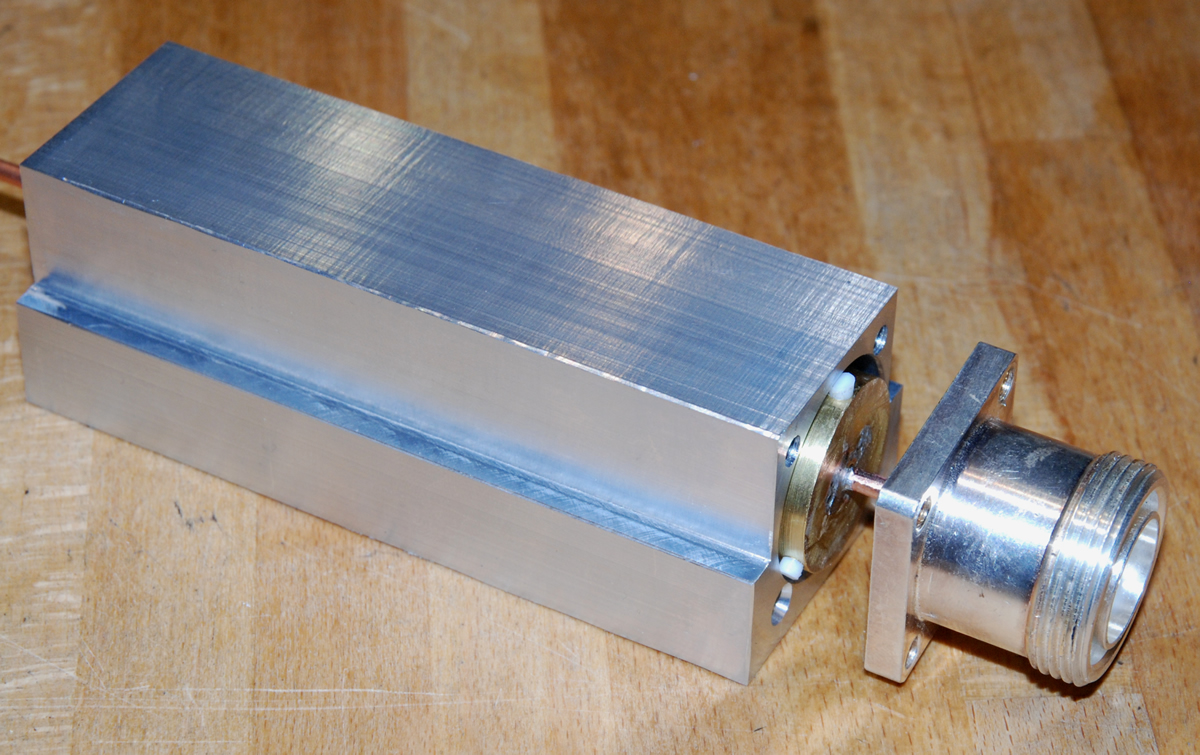 I soldered the disks and the first 7-16 DIN socket and fitted them into the outer tube, then cut the central tube flush with the other end of the outer, 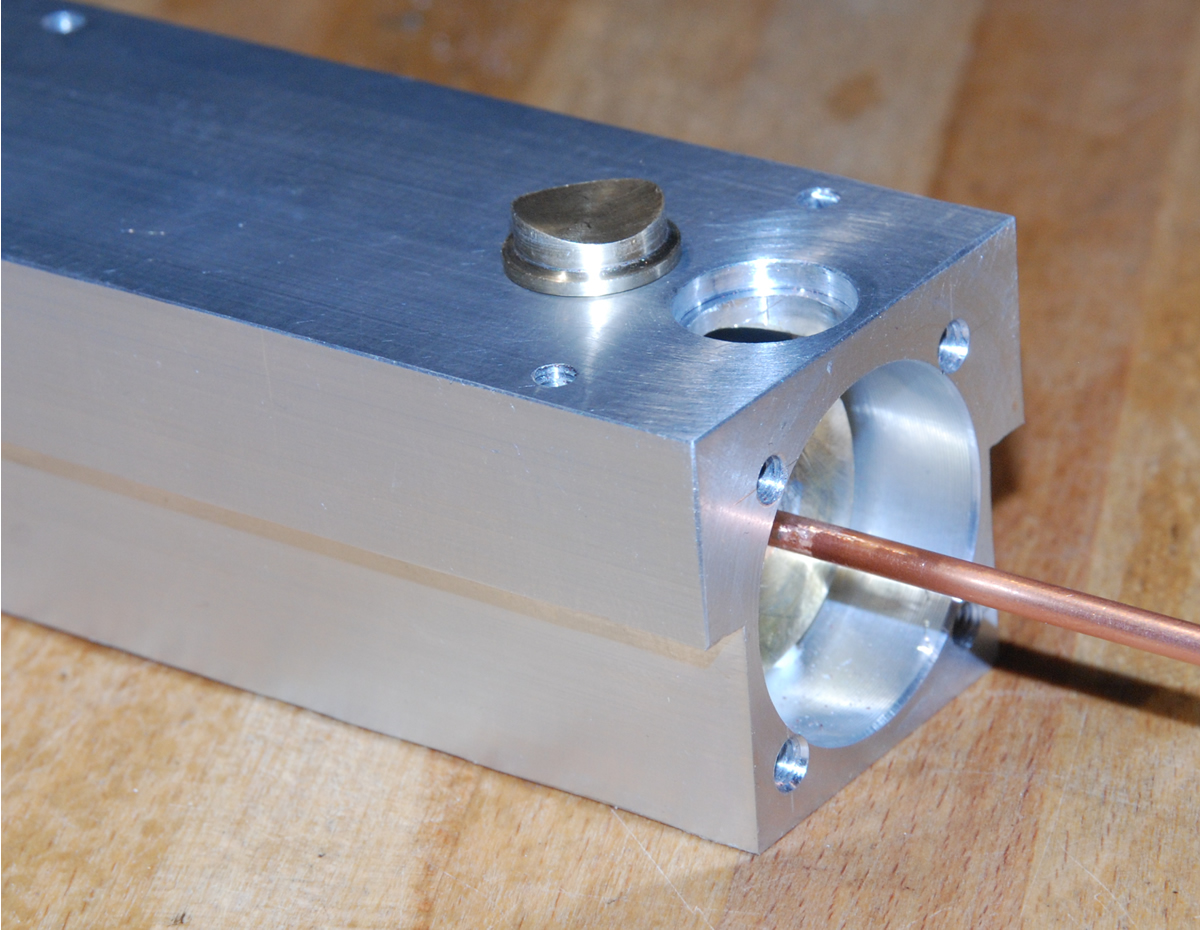 So I could solder the second 7-16 DIN centre conductor in place, I bored a stepped hole in the underside of the body, and milled a 15mm radius curve on the end of a brass bar to make a plug which matches the inside curve of the body. Perhaps not really necessary, but it was a quick and simple piece of milling using a boring bar.

I turned the plug to be a tight press fit into the access hole. If I ever need to get it out, I’ll have to drill and tap a hole in the plug! 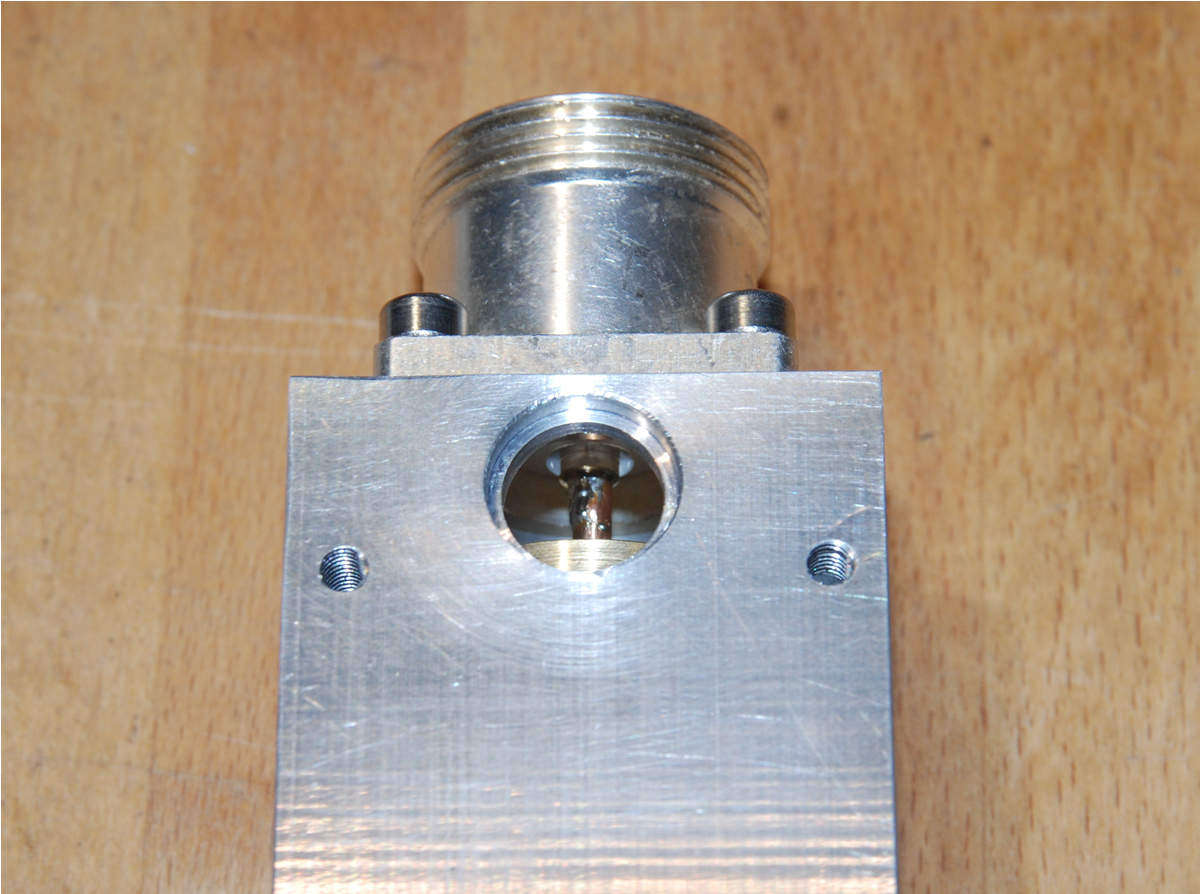 The end of the 7-16 DIN centre pin was turned to 2.1mm to be a push fit into the 3mm copper pipe, same as at the other end.  I tinned the pin and the inside of the pipe after cleaning them with IPA and used rosin flux (Weller Electronic Flux T0051383199) then reflowed the joint and pushed the connector into place. 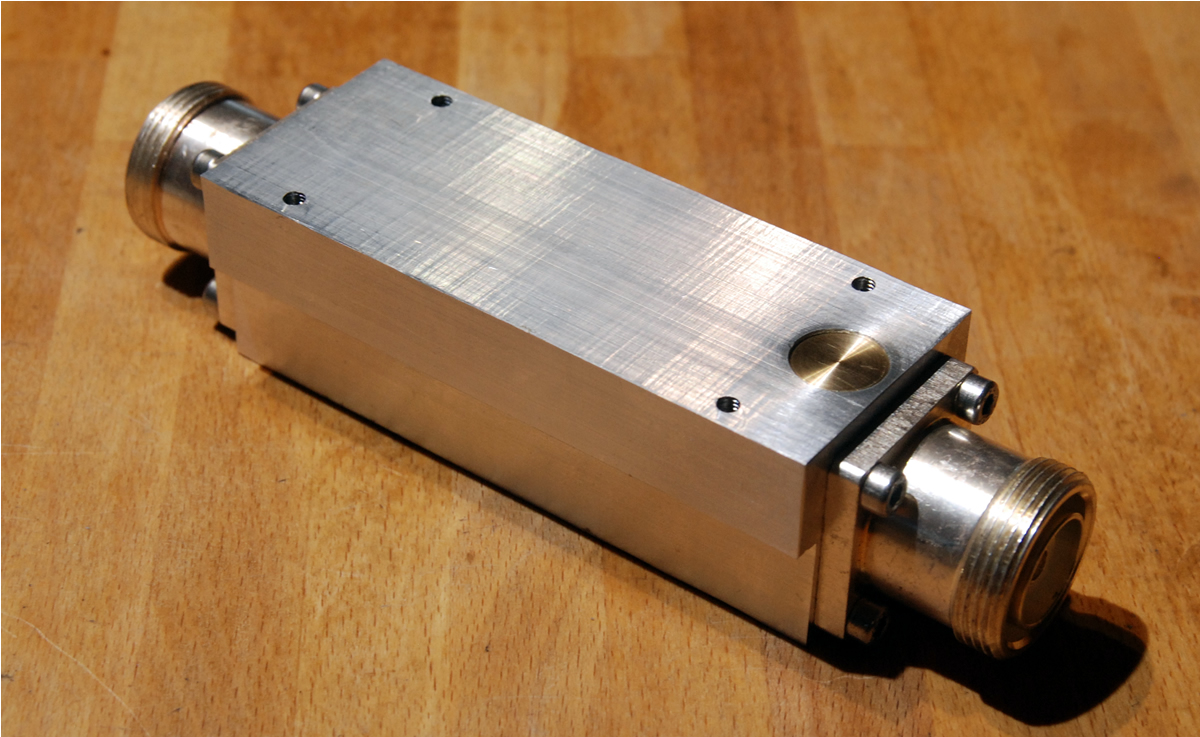 Underside showing mounting holes and the plug protecting the access hole. I’ve fixed it in place with centre-punch marks around the plug. 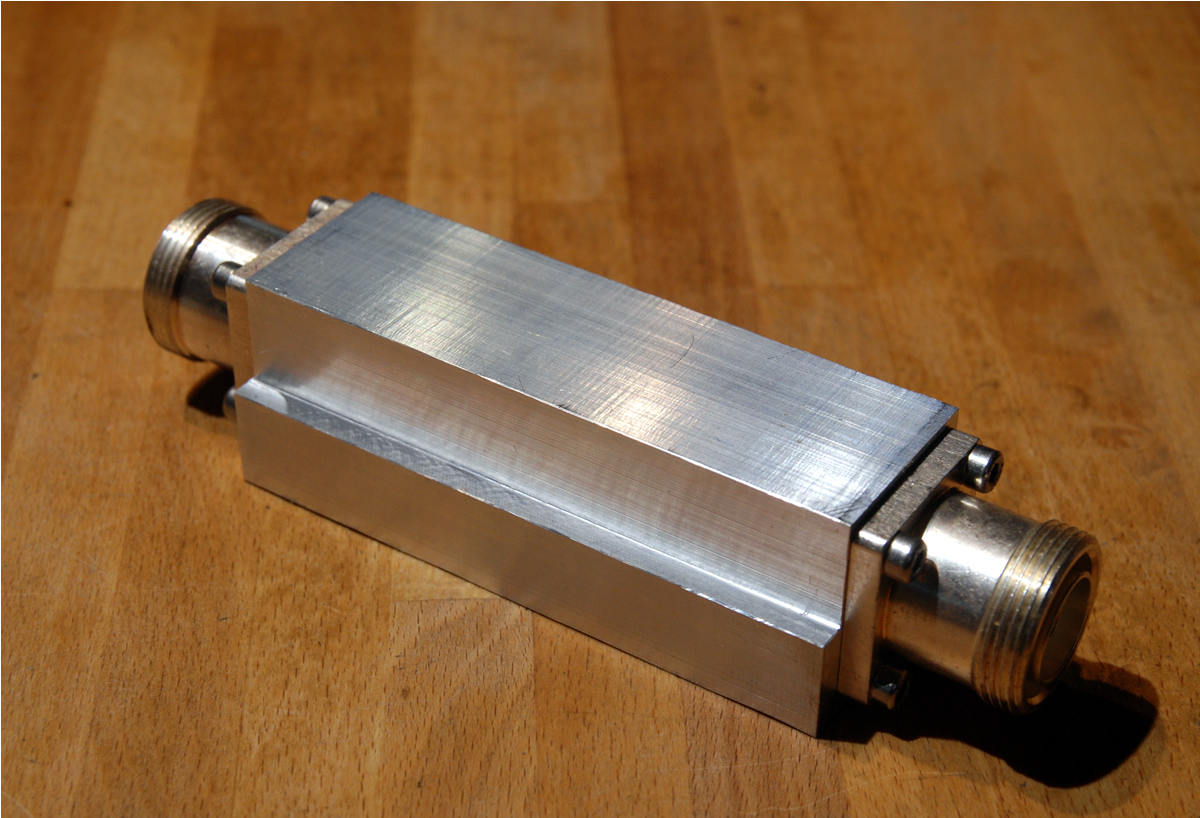 For a quick test of the response, I checked using my Agilent E4421B signal generator and HP436A power meter.  At 1296.2MHz, the insertion loss was less than 0.03dB.  At 1500MHz, -7dB and at 1800MHz, -30dB.  I then set a 1200-2900MHz sweep running and the analyser monitoring the same range with peak hold, and the response curve looks reasonable, with the 2nd harmonic down at least 60dB.  I need to do a proper set of measurements up to 3rd/4th harmonics, but that needs the tracking generator setting up. 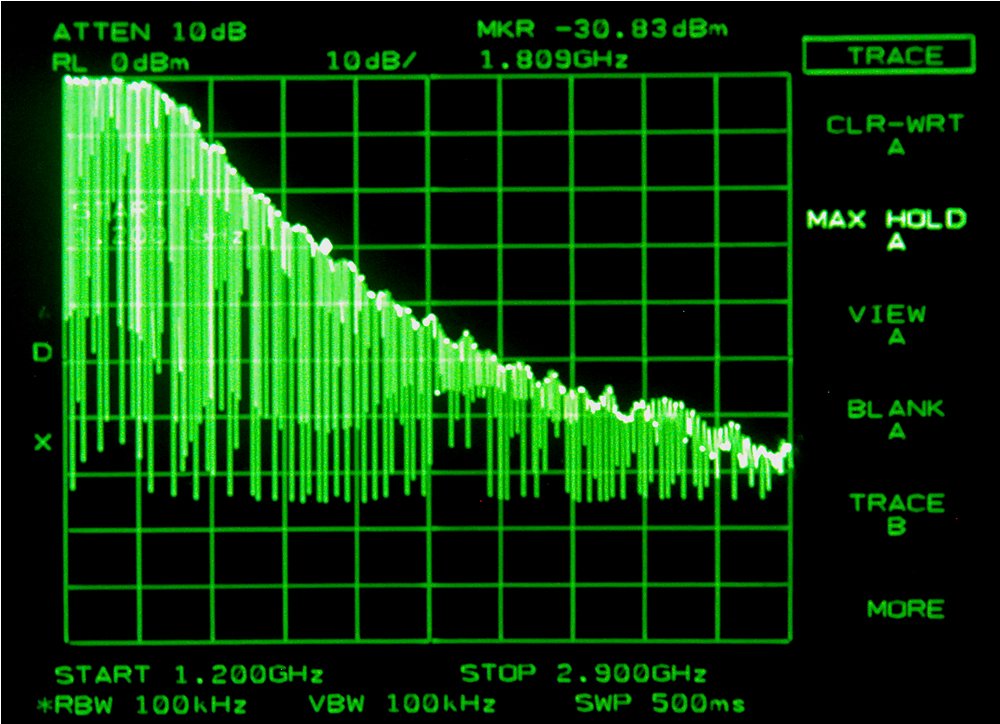 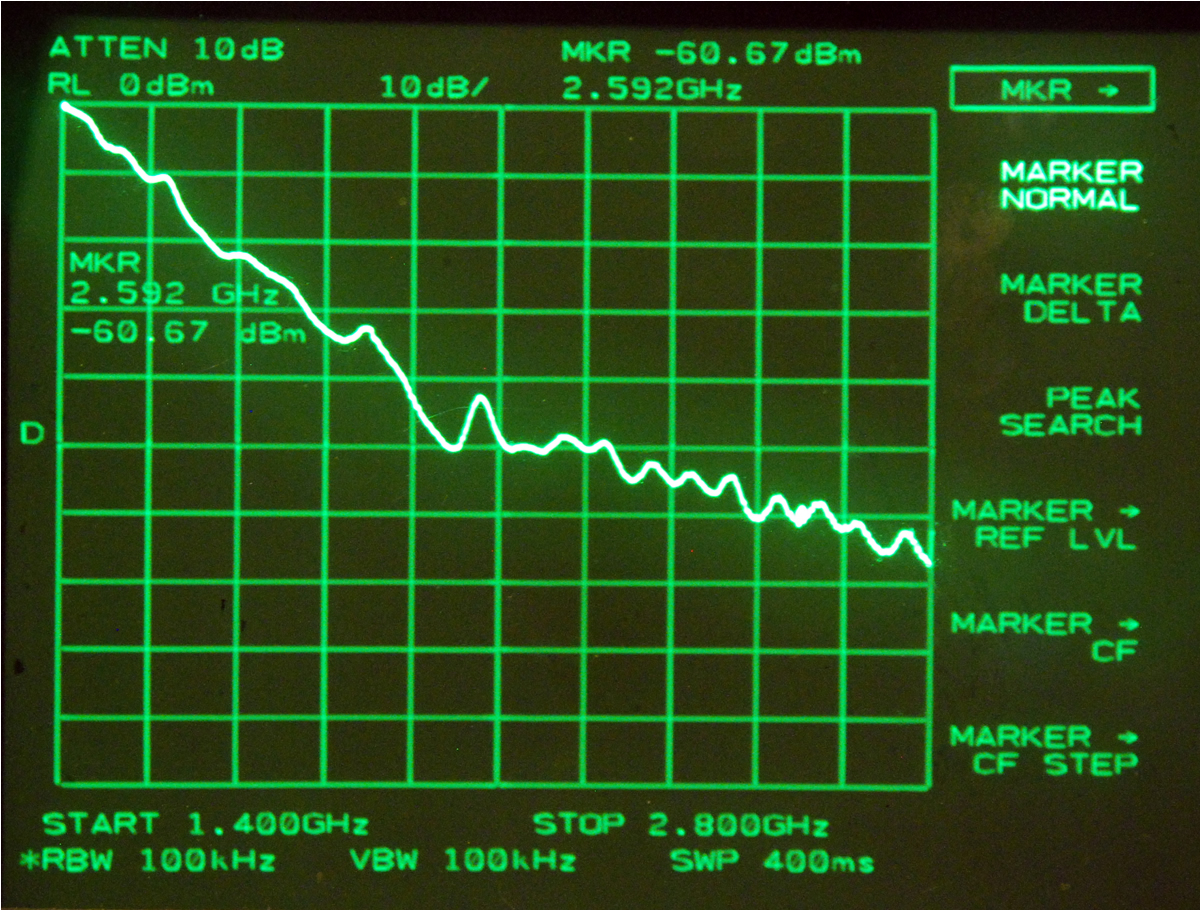 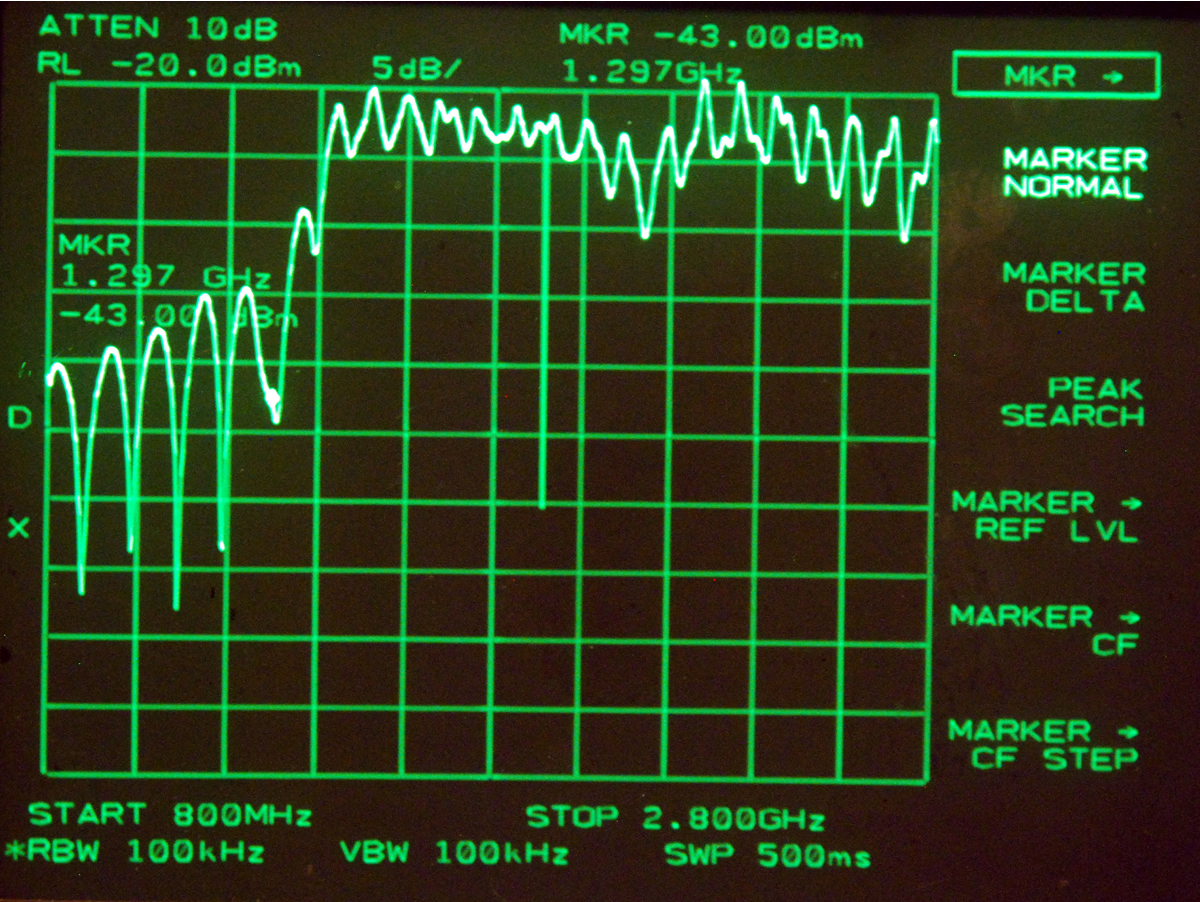 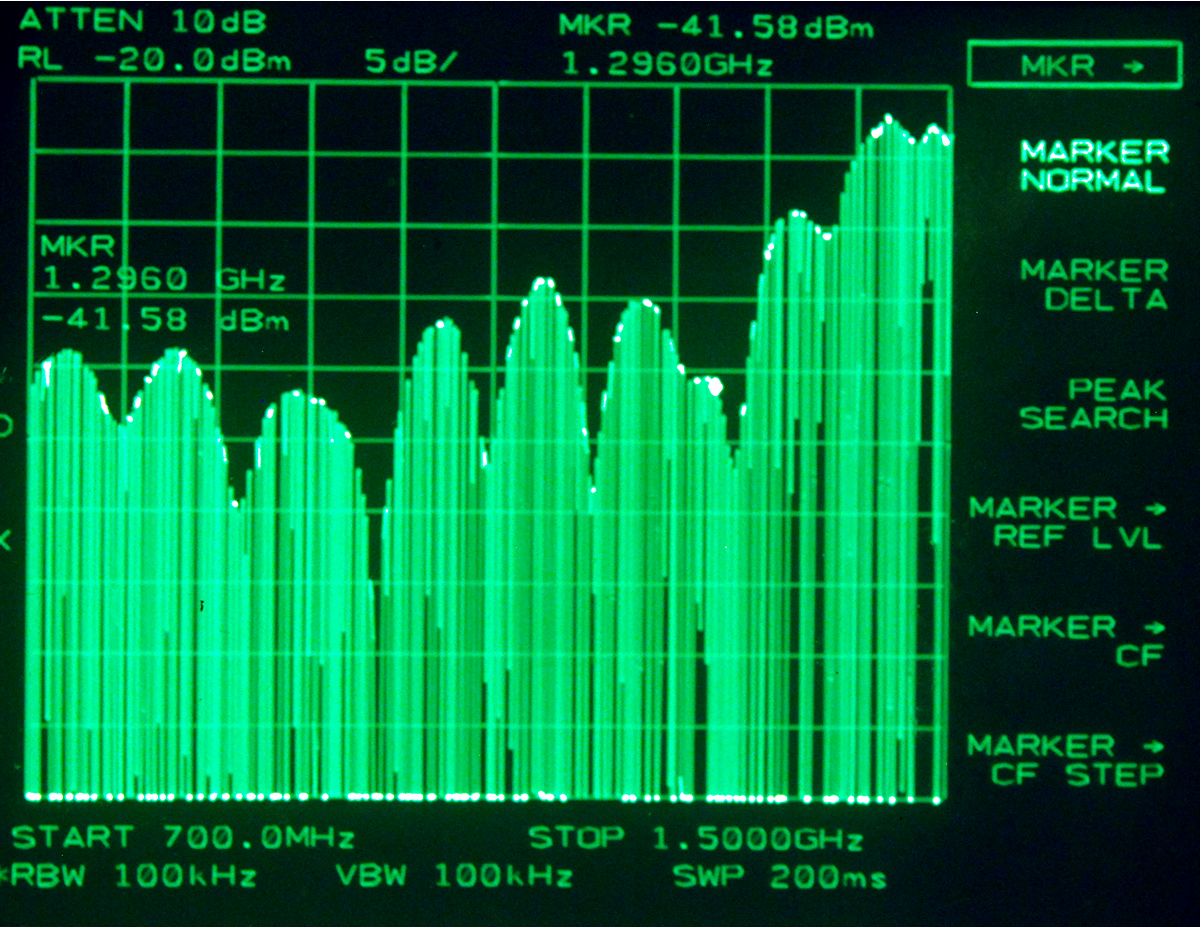 Multiple tests of insertion loss compared with a female-female 7-16 DIN adaptor show a  spread of values from 0.01 to 0.03dB. That is probably within the error limits of the test equipment.  As that represents under 2W total loss, I think that is acceptable.

Ten minutes key-down at 280W from the watercooled PA with forced-air cooling of the dummy load showed no temperature change of the body or connectors, so I think it is working fine.  I did consider getting the copper and brass parts silver plated, but I don’t think there is anything to be gained.

Interesting that the theoretical minimum of loss at 6.6GHz is definitely real, with only -3.2dB loss at 6623.7 MHz

I am reasonably confident in the diameter of the discs as I used two good digital micrometers and a Moore and Wright analogue one and calibrated them with 25mm and 30mm reference standards.  Width of the disks is less certain as only one face is machined parallel. The inside bore measurement is a little more tricky.  I used my inside bore gauges, plus I made up a couple of gauge plugs, one undersize, one oversize, which I measured with the micrometers and used as a test piece to verify the bore.

I had an email from Gary G3TMG, who has been doing some analysis of the design using a 3D E-M solver.  I have removed the recently-posted measurements I made with the Agelent E4421B and HP436A with the 8481D -70dBm to -20dBm sensor as it looks like there is a problem with leakage in those figures.

I am going to re-test using a simple male to male coupler in place of the LPF and use through attenuators instead of a directional coupler to do the measurements.  I may also use an HP33330B crystal detector and set the level on the signal generator to give a specific output form the detector rather than using the power meter for measurements.

Gary also asked about return loss measurements, which I have not had time to do yet, and about my confidence level in the physical dimensions of the filter elements.

I machined the bore and discs using my Colchester 1800 lathe, and tested for parallelism with dial gauges to better than 0.01mm.  I only checked each end of the bore, but I ran the boring bar through three times at the same diameter once I was close to the correct measurement, to reduce any error from side pressure on the tool.  The last cut only showed a faint dust. However, with a 2mm clearance, I don’t think the model would be too much out even if the bore or disks were off by 0.02mm.The biggest variables are the concentricity and the positioning of the disks.  I should have made up a jig to hold the disks, or perhaps drilled and tapped a grub screw in each one.  All I did was set a vernier to the right spacing and held it in place while I soldered the disk.  The fit on to the copper pipe was fairly good, with almost no rocking detectable, but that could mean the disk is canted by a small amount, as well as being offset from the ideal position.  I measured each spacing individually rather than absolutely from one end, as I felt that would give the most accurate result for the length of the hi-Z elements.I hand-filed the excess solder from the faces of the disks and the central tube.  I could have done the soldering much more neatly if I had jigged it up and done it on a hotplate.The concentricity is determined by the length of the PTFE rods.  I tried to get it close, using a 2mm drill as a test of the spacing, but it is hard to get it better than 0.1mm.  However, the error in the characteristic impedance and effective capacitance for a 5% offset is not great.There is another potential error in that I machined the pins of the DIN connectors so the step was right at the face of the aluminium block, but there is a 4mm length where the pin emerges from the PTFE insulation where it is inside the back face of the connector, with 4.5mm diameter pin and 16mm ID.  I wondered about making up a PTFE insert or a brass collar to make that 50 ohms, but in the end I decided not to bother.It would be good to know if the concentricity matters less than the ratio of diameters, and if the spacing is less critical than that ratio, and whether the thickness of the disks needs to be as precise as the diameters.  Also would be interesting to know if having one face of the disk as a slight cone makes much difference.  When parting off the disks, it was very hard to get the parted-off face to better than 0.04mm difference between edge thickness and central thickness.The capacitance of the PTFE pips is also a bit tricky as they are modelled as simple dielectric patches between the edge of the disk and the outer tube.  Mine are actually 3mm rods pressed into 5mm deep radial holes in the edge of the disks, so I guess their effective capacitance is a little lower than a 3mm diameter x 2mm thick patch.If I get some spare time, I’ll do some return-loss measurements to see how things look.  I have some decent HP directional couplers, but I can’t go down much below 800MHz with them.