Finished welding up the pivot plate for the SCAM 12 mast.  15 inch spikes x 4, 12mm bolts for pivot, and mounted on 1 inch marine ply base to spread the load.  Separate shaped plywood load-spreader plat to put under the mast base. 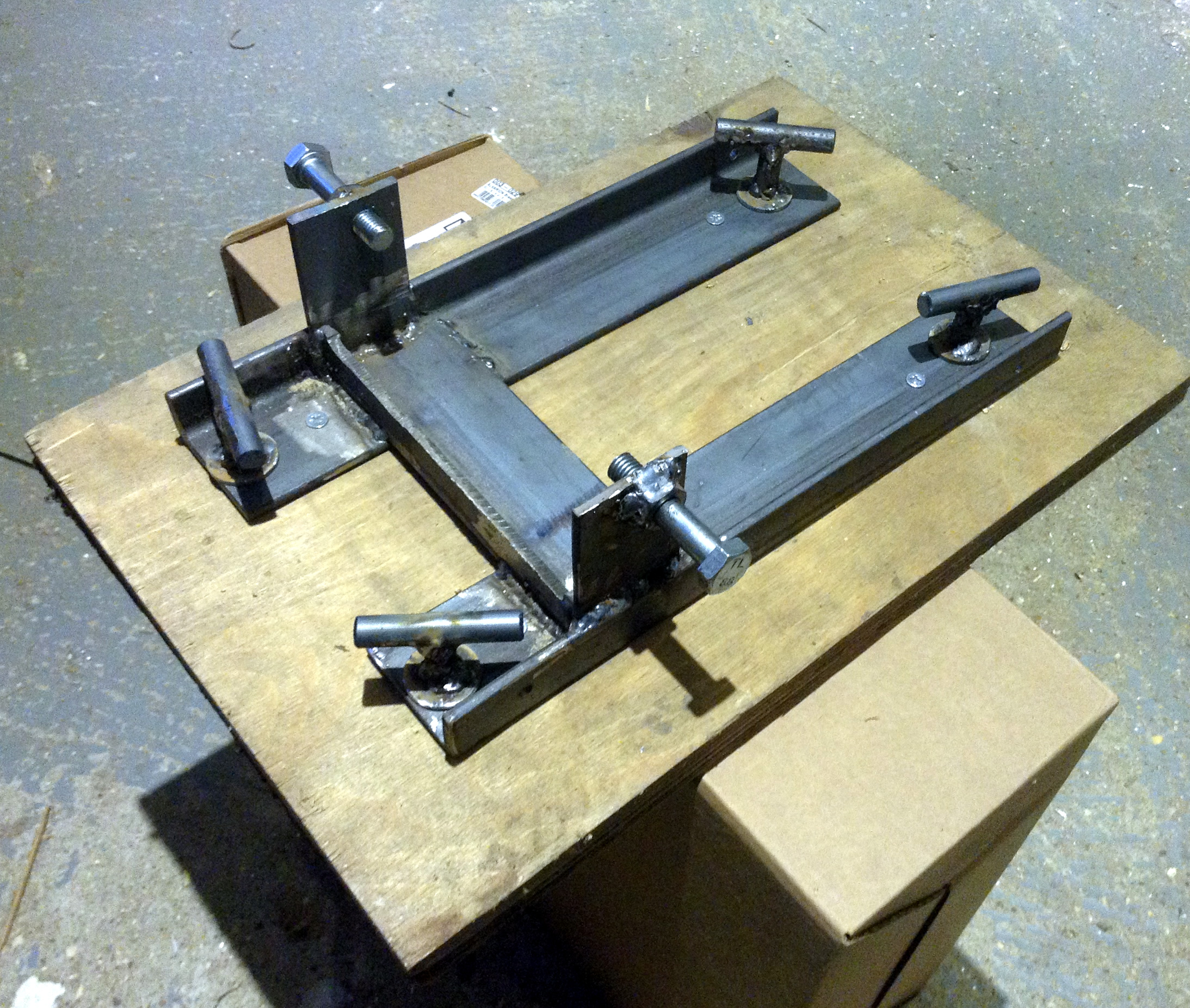 Interesting article on how the calculations are done for the Blitzortung  lightning detection system.

GB3MHZ earlier today lost sync for a while 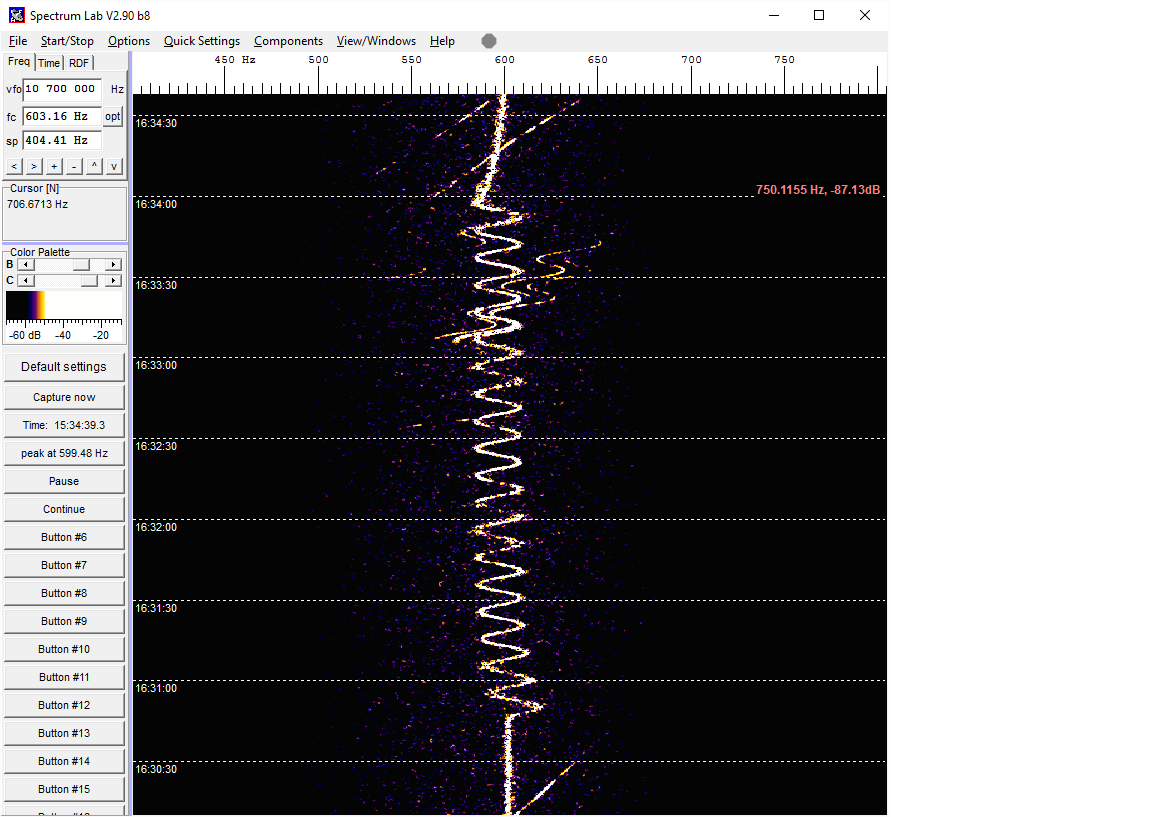 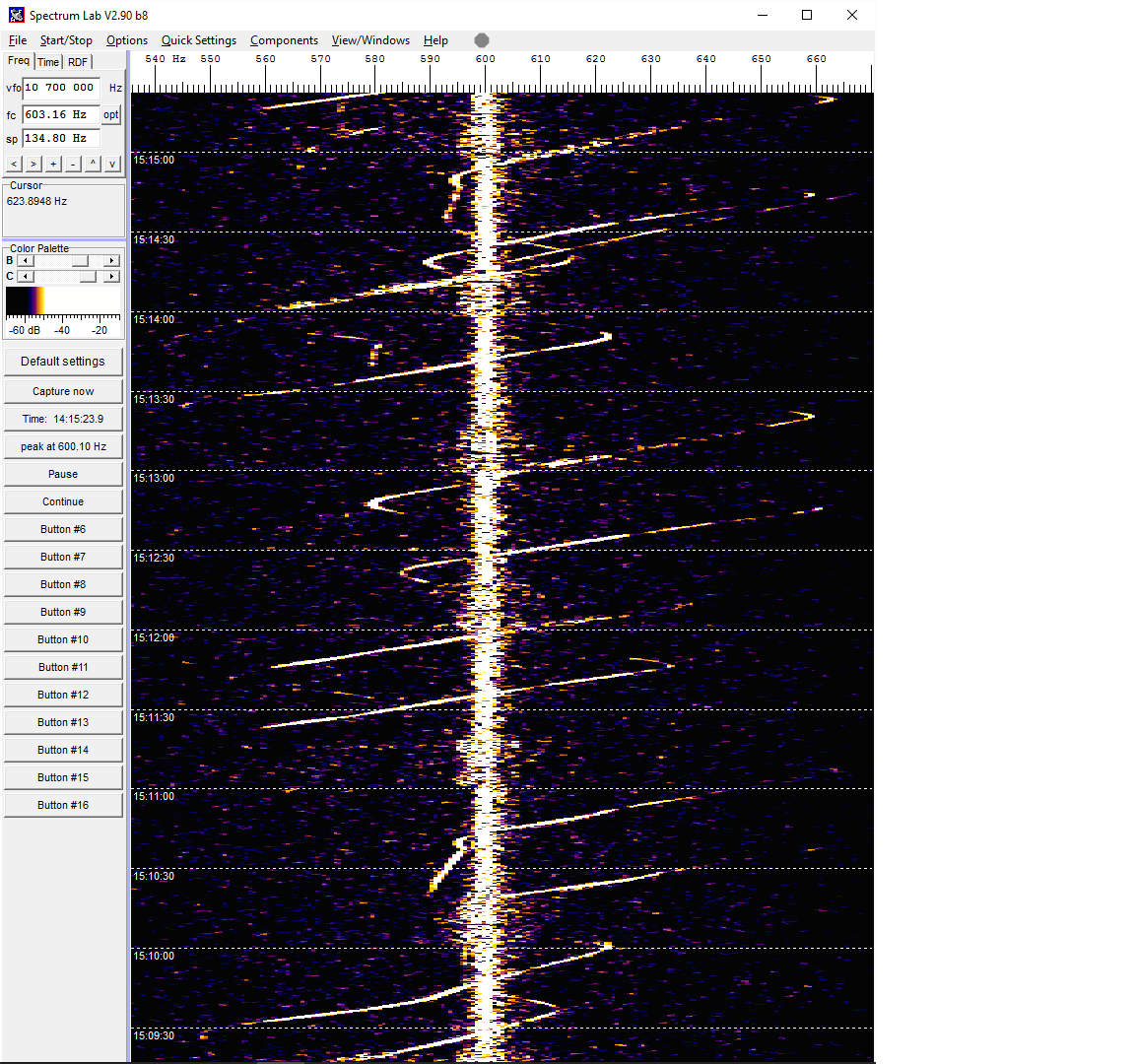 Get the others at https://www.alchemistowl.org/pocorgtfo/

PoC or it never happened.

Beware, this PDF is a polyglot as usual, but the Pastor Manul Laphroaig is to be trusted.

The numerous epidemiological studies of injuries caused by contact between HV lines and fishing poles show that deep burn injuries to the hands and feet are very common, some of the casualties had up to 70% burns, some took so much current they lost limbs, and there were also inhalation burns caused, probably, by plasma or at least hot combustion products being inhaled. A single Chinese burns unit saw 50+ fisherman with these injuries over a twelve-year period. Those that survived were hospitalised for around 30 days, most had life-changing injuries. And fishing is still legal. Amazing.

Similar type of injury patterns were seen where TV antennas fell across HV lines, although in general those were much lower voltage than the >10kV generally seen in the fishing casualties.

My experiments with glass fibre poles found that taping an 18MHz vertical dipole to a pole required the dipole to be shortened by 3.2% to bring it back to resonance compared with hanging it vertically in free space at the same height. I guess this was due to the presence of dielectric material close to the wire. Whether the wraps every 600mm or so made from three turns of 20mm wide PVC tape was significant, I don’t know. Resonance seemed particularly sensitive to the position of the bottom metre or so of wire. If I untaped that and moved it away at angle from the pole by 20cm or so, there was a significant change in resonance of more than 1%. As the pole is thicker at that level, I suppose that makes sense.

My dipole was made from 2mm enamelled solid copper wire, and extended 20cm above the top of the pole. As is my usual practice, I made a 1cm loop at each end to prevent eye injuries while messing about. The high value of electric field at the top of the dipole had very little dielectric material nearby. At the bottom end though, there was a lot of material. Running a few hundred watts for a minute or so didn’t result in any significant change in resonance, not was there any sign or heating of the fibreglass near the bottom end of the dipole (Measured with an infrared thermometer on a long stick!) However, it detuned rather horribly in the rain, by 100kHz or more.

I guess that means the dielectric constant of glassfibre and resin at 18MHz has little or no dissipative component.

So ends the factual element. Going into supposition mode, my *guess* would be that the dielectric constant of a carbon pole would be similar in magnitude (see the various radar absorbance studies using short-strand pultruded material) but that there is a significant conductance and therefore significant dissipation of energy where there is a large electric field gradient. Where the wire is alongside the carbon, the electric field will be limited by the EMF across the length of the wire, so there would be only a small amount of dissipation in the conductive part of the the complex dielectric constant. The problem might be at the lower end, where the electric field gradient off the end off the wire is very high. That might drive current in the part of the carbon tube beyond the end of the dipole. That could have some amusing effects on the resonant length of the dipole as well as some potential for heating. Skin effects would come into play of course, and there would be huge dependencies on the nature of the carbon fabric weave. If it is satin weave, with bundles of parallel fibres in a resin matrix, which are not in intimate contact, that would perhaps be worse than a tight bundle in close contact with neighbours.

I have seen reports of carbon fibre bodywork on RC cars catching fire spectacularly when in contact with 7.2V LiPo batteries, and seen some YT demos of what happens when you put 12V across a bit of carbon fibre plate (much smoke, then white-hot plasma), also lots about absorbance in the 8-18GHz range, but nothing on HF. Time for a controlled experiment for someone with money to burn…..

So, brave experimenter: Hang a vertical dipole from a high point, feed it at right angles, cut to resonance at a convenient HF frequency. Now tape it to a carbon fishing pole and erect it as the same height. Measure the new resonance, then cut to bring it back to the original resonance, recording the new length. Put some RF into it at 10W, see if the return loss changes over timescales of a minute, or if there is any heating of the pole near the low end of the dipole (or anywhere else). Whack up the power in 3dB steps and watch for return-loss changes or heating. Make sure you are filming the experiment so you can catch the moment the pole explodes in a fiery cascade of plasma and burning epoxy. Post on Youtube and bask in the number of views. Or, if nothing happens by the time you get to full steam, report it on here and make everyone happy. Please do not burn down any sheds, houses or trees and don’t kill/injure anyone while doing this. Wear appropriate PPE, fill in a detailed risk analysis and please do not stand on top of a Landrover to make the measurements.

I would be happy to using a carbon pole as a ground-plane, with a few elevated radials from the feedpoint, and using multiple parallel or meshed wires along the pole so it had almost no electric field across it, or tape coax to the pole and run an inv-vee out to two support points and a thin guy to a third point. However, I want to see the fireworks, so please can someone do the experiment in the interests of the Furtherance of Knowledge.

When I bought my Clark SCAM 12, it had no legs, so I’ve fabricated some plates to  clip to the pins and attach using a single bolt, and welded those to square tube legs with telescopic sections ending in 100mm square plates with holes for 12mm steel spikes.  Urgent job for VHF National Field Day!  Hope to have time to degrease and clean up and paint them before the contest, but there are other pressing matters like fettling the 70MHz transverter and fixing the noisy fan in my 2m PA, so it might just get a wipe with an oily rag. 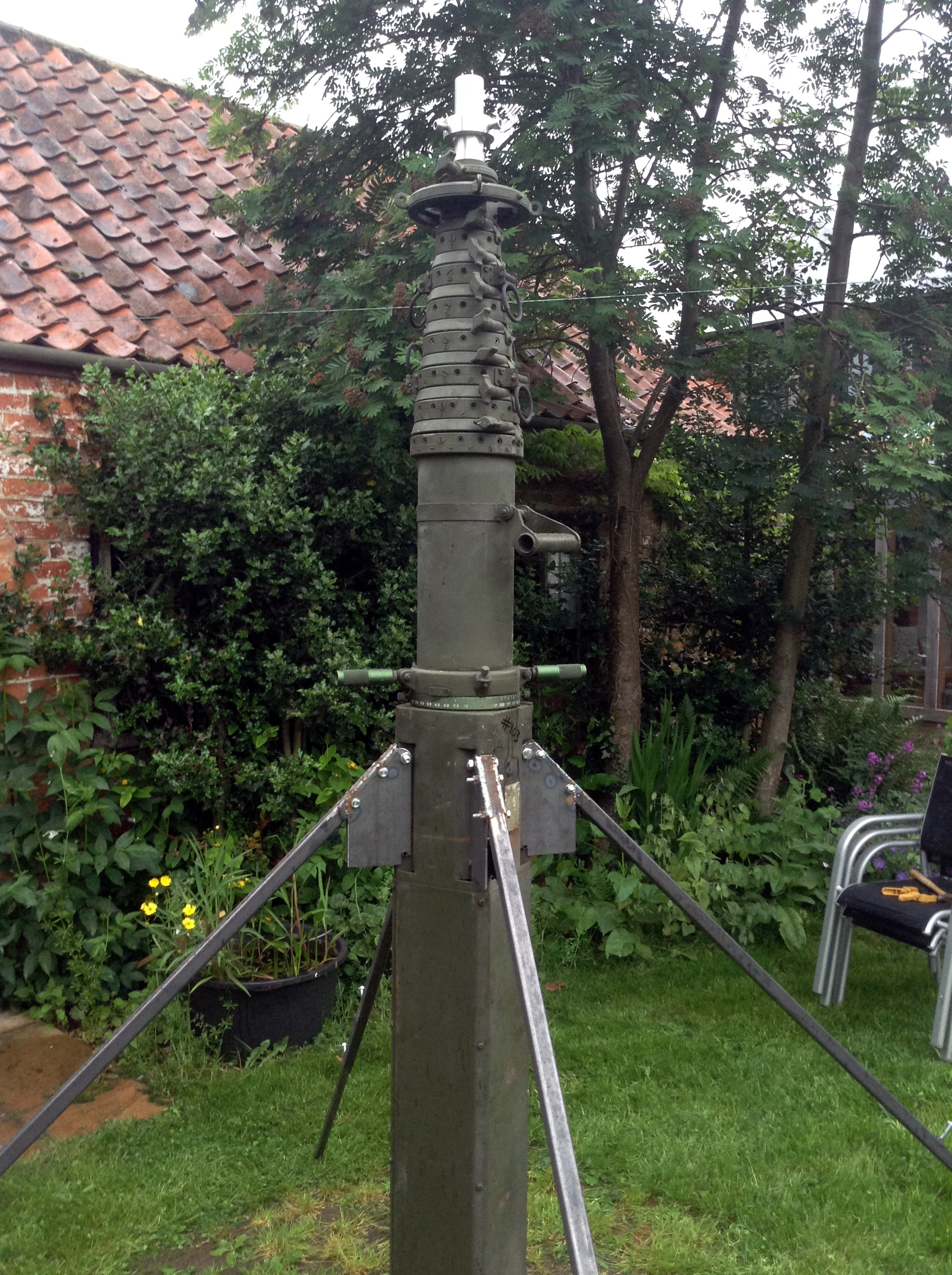 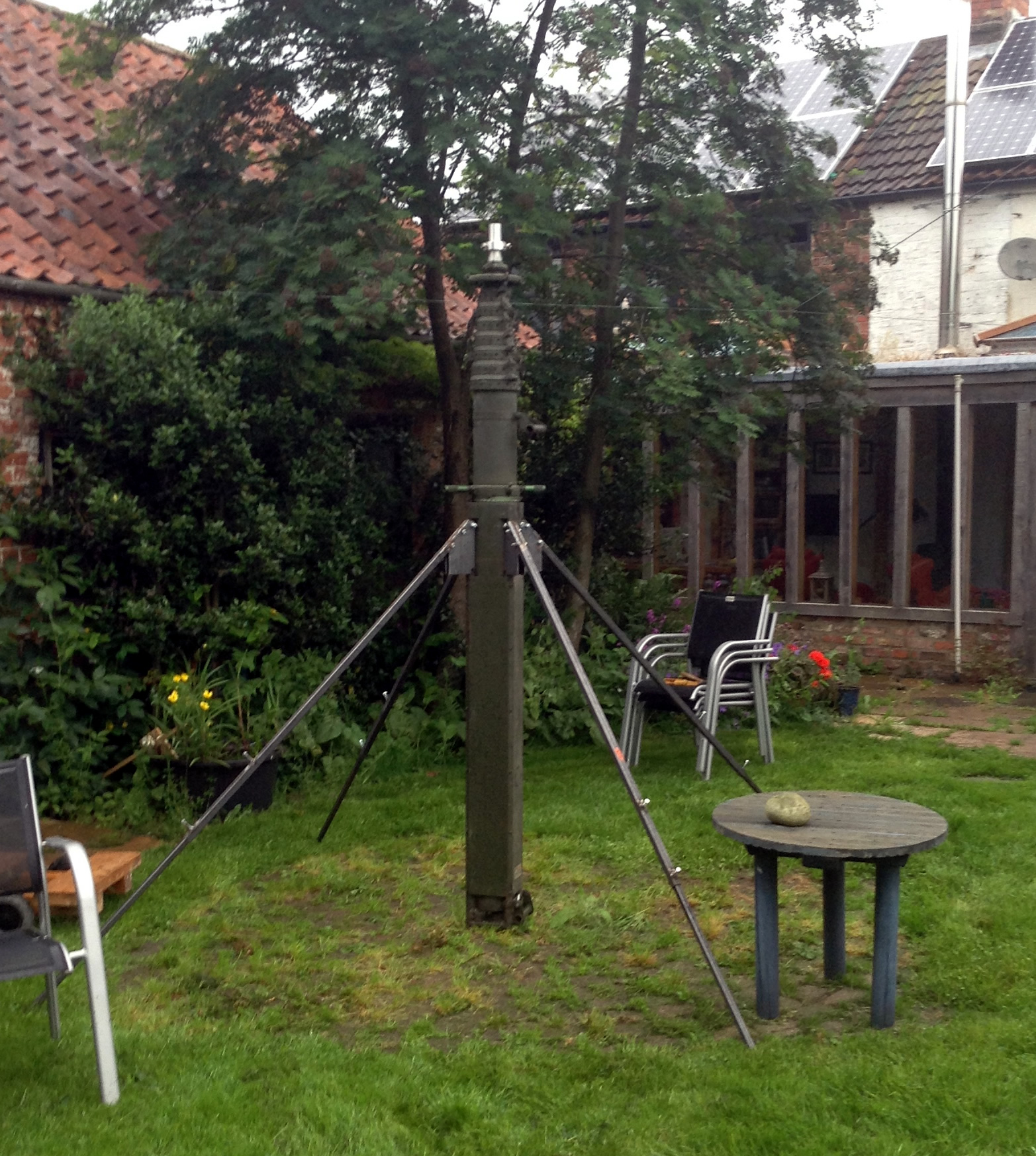 Please subscribe to it so they can get a nice permalink name. “UChXhVN-JythhYCHbM27AHNw” is certainly unique, but mightily hard to remember.  Oh, and while you are at it, if you *are* a microwaver, why not submit a video showing what you are up to?